The kids are gradually relieving me of my LPs. “Mmm, nice Trout Mask Replica, dad, can I have a look?” They know their florid curiosity will get me to hand it over, and I will picture them cherishing the gift of music, even though it will become an ornament in a student gaff in Cardiff. Bless ‘em…

But they can bugger off if they think they’re going anywhere near the singles! A lot of us were lucky enough to grow up in a time when, for a modest outlay, a band would present us with a porthole through which we could see their entire world of possibility. Whether it bounced into the charts at Number One or crept out timidly on a twilit independent, a seven-inch single would show a band in their pomp, channelling their entire raison d’être into that small handful of plastic. If they could be bothered, obviously. An LP would tell you everything before the second date, but the right single was an exotic little promise, a whispered intimacy between awkward teenagers, an unforgettable first kiss. A single was Love!

The very embodiment of enigmatic allure.

The romance bloomed in childhood, when there were plenty of records around the tiny house. The singles, a typical late-60s motley, lived in a cut down carton of Heinz 57 Varieties, for reasons of tidiness and poverty, and they exuded an allure that began with the labels as much as the music. There was some educational value in applying my nascent reading skills to artist names and song titles – Joe Dolan, Petula Clark, Ide B The First – and my precocious devouring of the Wide Range Blue Books was surely aided by my understanding that “the unauthorised public performance, broadcasting and copying of this work was prohibited.” It didn’t stop there – the songwriting credits in brackets, the catalogue numbers ending with A or B, the adverts on the covers for Morphy Richards hair dryers and so much else, all of these details held an exotic attraction. But the greatest thrill came from watching the record go round and round, at a breakneck 45 r.p.m., while wondering if the needle was going to reach the end of the groove before the song finished. The race always ended in a draw! It was a miracle, how come the ever-growing swell of Downtown wasn’t too much for such a small space? How come there was still so much massiveness for the band to handle in just one-eighth of an inch of remaining playing surface? Surely one day they’d overrun that little platter and break out into the living room, rattling the sash windows as they blared me from one brass-wailing ecstasy to the next. They didn’t, alas, but they begat the abiding notion that a small piece of plastic could contain all of the joy, the creativity, the very fecundity of human imagination. Well, I actually said something like “wow, they can do anything they like on one of these fellers,” but you get the picture. In the fullness of time my own purchases joined them; “Mama Weer All Crazee Now” by Slade for 40p in Boots chemist, “All Because of You” by Geordie, and various others, all in the uniform guise of banging and shouting. And a few years later, banging and shouting leapt once again to the fore, and all hell broke loose!

All hell breaking loose at the height of punk!

To be fair, all hell actually opened the front door with the chain on, and peeked outside timidly. Punk rock caused such a moral hoo-hah that a shy 13-year-old might have been reluctant to tell his family that he quite liked some of these scions of degeneracy. It became clear, however, that his family wasn’t arsed, so all hell could now slip the chain off and break loose at its leisure! The punk era was a Golden Age for the seven-inch-single, hallmarked by imagination and inspiration, madness and genius, hope and love. And because the music was my own, because it wasn’t going to live in a Heinz soup box, and because the rest of the family thought I was daft, the romance intensified fiercely! Scented seven-inch love letters were left casually around the house, all sworn secrets I wanted to tell everybody. Like the one by the Jam, in a glossy picture sleeve showing them in their suits and bad shoes. This one bypassed the stolen kiss and went straight to ear-nibbling, in the form of…ooh…an etching! Beside the matrix number stamped around the edge of the label were the words “Tim Tom At CBS.” All efforts to play hard-to-get were now doomed. Had this been going on under my nose all the time? The Heinz box was ransacked in the manic search for cryptic engravings in run off grooves, for missed hints and inaudible whispers. The Honeycombs? No. Devil In Disguise? No. Top Pops, Six Hits For 5/11-?

Six top hits for five and eleven! Not the original artists.

Still no. But never mind, Elvis could get back to Squaresville, because the gorgeous private world which I now inhabited had loads of them! The most regular peck on the cheek came from “A Porky Prime Cut,” although others, such as “Spot’s White Powders” on a John Cooper Clarke record, meant that I’d be offering my cheek for the rest of my days. And then came Ian Dury’s “What A Waste,” whose message “999 Rule OK” piqued my interest in the rest of the label. The familiar information was all there, but arranged in a square, and the copyright message was suffixed with a coquettish “don’t fuck about or else.”

Heartburst! For the second time in a year the old family singles were scrutinised, this time for disruptive label messages. Who else may have been quietly warning us of the perils of fucking about? PJ Proby? The Monkees? Helmut Zacharias? Absolutely nobody, that’s who. Still, there was some small cultural value in learning how much danger one might expect from a Petula Clark record. But as the music became stranger and the bands and labels more obscure, so grew the subversions: handmade covers, samizdat messages that looked like calls to arms, 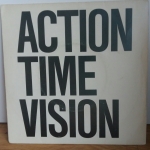 A call to arms, probably.

comic strip sleeves, records produced by “nobody,” singles with the same two short mono tracks on each side, postcard inserts, all of it happening in that darkest of dark just behind the spotlight. How was my pocket money supposed to cope with this? Or my mind?

My heart managed, though. For all of that esoterica, buying singles could capture perfectly some beautiful life moments, and every A-side could be coupled with an acute memory of how you acquired it, the time, the place, the weather, who you met, what you did afterwards, how fondly you stared at it on the bus home. It may be impressionistic, but is there any sweeter journal of youth than a collection of 45s, any diary more joyous, more heart-rending, more preposterous, every page a picture sleeve? As the budget moved from school dinner money to a modest wage, so the trip out to buy records became part of a social flowering, of new and deepening friendships, every disc a step towards the formation of a lifelong tribe. And as new romances spread to third and fourth kisses, and to even more spine-tingling whispers, so the love of the seven-inch single started to stand graciously to one side; although they all remain, to this day, in a stout wooden box in the living room. Well, you can’t have too much love, can you?

And anyway, sweet and winsome as they were, not one of those kissing, whispering girls had even heard of Joe Dolan…

One thought on “The Romance of the Run-Off Groove”

Tell us what you’re looking for here